Store your solar power - batteries help you do it

Home / News / Store your solar power - batteries help you do it

Store your solar power – batteries help you do it

Home / News / Store your solar power - batteries help you do it

Store your solar power – batteries help you do it

This blog post is about batteries, how to store solar power and the Nobel Prize in 2019.

If you want to save electricity costs and energy, a photovoltaic system is worth an investment. It is important to know that you can store the solar power you do not consume immediately. So it is available for you if the sun itself does not provide enough energy. 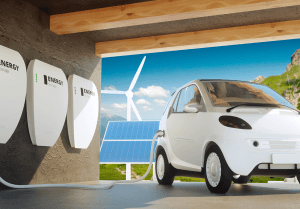 Solar power is stored in a battery which is used to charge an electric vehicle.

…which is then stored in batteries

Lately, lithium-ion technology has been gaining ground when it comes to storing solar power. Although it is more expensive than lead-acid technology, it offers various advantages. For example, you can use the stored solar energy almost completely thanks to an efficiency of 93 to 98 percent. In addition, the lithium-ion battery can withstand a discharge depth of 70 to 100 percent. So if the storage tank is occasionally completely emptied, this does not have such a negative effect on its service life. How long a lithium-ion battery can be used – there are currently only estimates based on laboratory tests. With optimum energy management, the service life can therefore be up to 20 years.

The solar energy is stored in batteries to supply the house.

Energy storage thanks to batteries

A look at the history of the lithium-ion battery

In order to have electricity available independently of network providers, many homeowners not only rely on photovoltaic systems, but also on the storage of the solar energy generated in this way. Batteries are used to store electricity.

Lithium-ion batteries, which are used in battery storage systems for households with photovoltaic systems as well as in the field of electromobility, ensure that these products become increasingly profitable and competitive due to their technological and price development. In this way, they contribute to the energy revolution and help to reduce greenhouse gas emissions and air pollutants.

But what is it about this battery, for which a Nobel Prize was recently awarded?

However, the change is not only reflected in the replacement of electronic consumer goods by electric vehicles as the biggest source of demand, but also in the cost of batteries: since 2010, these have fallen by more than 80 percent. In addition, the capacity of battery production has increased by a factor of 200 – in just 15 years.

A historical insight into the battery

But the lithium-ion battery has not only been around since the 1990s. Instead, we have to go back another 20 years. At the Technical University in Munich, the lithium-ion battery was researched in the 1970s, creating the basis for the development of the lithium battery. This was followed by a change of location and a leap in time: John B. Goodenough and his team at the University of Oxford developed the first fully functional lithium cobalt dioxide battery in the 1980s.

That Goodenough would win a Nobel Prize with his work was probably not clear to him at the time. Today, his technology is regarded as pioneering and revolutionary for society. In 2019, together with Stanley Whittingham and Akira Yoshino, he was awarded the Nobel Prize for Chemistry.

The Nobel Prize in Chemistry 2019

Yoshino and his colleagues at A&T Battery in Japan achieved industrial implementation in 1985. Global demand for batteries has grown steadily since then. Forecasts show that this will continue to be the case. In the next five years, electric mobility is expected to have made the transition from niche to mass market. A study by the Fraunhofer Institute for Systems and Innovation Research ISI predicts a battery demand of 3 to 6 TWh in 2030.

Even though electric mobility today uses the majority of lithium-ion batteries, the battery will continue to be used in other areas. It is still used in numerous mobile devices or in portable power storage devices, like powerbanks. If you think of electricity storage as larger, for example with a view to photovoltaic systems, the lithium battery is also used there to compensate for fluctuations in electricity production.

The possibilities of use are already manifold, the potential of the battery is great. The application in the field of electromobility is one, besides the option to store solar power with batteries. The increase in performance and progress in terms of recycling are among the things that must be in the focus in the future, because nowadays it is impossible to imagine today’s everyday life without this invention.

Thank you for visiting IGS. Stay connected with the latest news, technology, and incentives for energy efficiency & solar technology.