It’s always sunny in Philadelphia … and New York… – well, at least enough to generate energy with a solar system even in the winter season.

Again and again we hear in New York or also in Delaware that solar would not make any sense, after all the sun doesn’t shine strongly enough – an argument that definitely doesn’t apply to our customers in California. But also here in the east / north of the United States we can say: Don’t worry. Our panels also produce in winter.

When the days get shorter and the sun shines less, the productivity of course decreases a bit, let’s not fool ourselves. But you don’t have to live in Florida or California to produce your own solar energy. First of all, the days with less sunshine are limited to a few months. In these few months there is usually no continuous snow. And even on cloudy days your system can produce energy. You also have to see it from the other side: if you live further north and therefore further away from the equator, the days in summer are all longer and therefore also the time in which the solar system can produce power.

The answer to question number 1, whether solar makes sense even in less sunny countries, is: Yes! 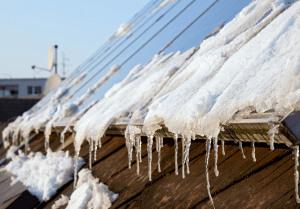 The snow can easily slide off the solar panels.

Question number 2: Does my solar system also produce energy when it snows?

If the solar panels are covered with snow, they do not produce. However, snow usually doesn’t stay on the panels for long. They shed the snow very well, because they are designed to attract the heat of the sun, usually they are laid out in the direction of the sun and mounted down. All this helps to free the panels from snow more quickly. In addition, the sunlight can also shine through smaller amounts of snow, so even with a light layer of snow on the panel can generate energy.
In general: Attention! Please do not remove the snow yourself. This can damage the panels and that would be a real shame.

The answer to this question is: as long as there is sunlight shining through the snow, the  panels will produce energy.

Question number 3: What about the productivity of my panels when it’s freezing cold?

The cold doesn’t bother the solar system. You have to know that solar energy is not produced by the heat of the sun, but by its light. Energy production is more efficient at colder temperatures, so the amount of electricity produced daily can be increased despite less sunlight during the day.

The productivity of the panels is not negatively affected by the cold. 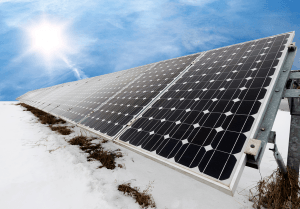 Question number 4: Why does a solar system generate energy more efficiently when it is colder?

Now it’s getting a little more scientific, but we’re trying to explain it in a simple way.
Electrons move around atoms. If it’s cooler they don’t move. But they are activated by increasing sunlight, because it means energy. The resulting difference in voltage makes a solar module produce more energy.

In summer, however, when it is warmer, the total energy level of the electrons is higher. The energy difference is therefore smaller and less energy is produced.

Another fact: depending on a so-called peak temperature, the manufacturers of solar panels evaluate the output. This is the moment when the panels work most efficiently. If the temperature rises above this point, the system is less efficient and generates less energy. The probability that this point will be reached in winter is therefore much less likely.

But let’s leave it at that for now. If you want to know more, you can always contact us. For regular information on solar energy, simply follow our blog or social media channels. You can find us on Facebook, Instagram, Twitter and LinkedIn

Thank you for visiting IGS. Stay connected with the latest news, technology, and incentives for energy efficiency & solar technology.